The Mechanism. WAP is a paper automaton whose main mechanism is Redtenbacher`s variation of the Cartwright straight-line mechanism, a twin gear driving a common slider crank. If the two gears have different but almost equal number of teeth, the up and down motion of the bar is then an addition and subtraction of two sinusoidal functions. The straight line generation, determined by the vertical motion of the bar, was a very important problem in the early history of mechanics. In WAP, the “random” motion of the unlucky airplane is generated at the center of the beam, that is free to spin. At that point, the two sinusoidal movements originate the oscillation that, together with the up and down motion of the bar, results in the air-pocket-like shaking up. 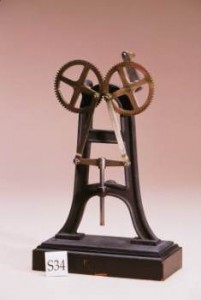 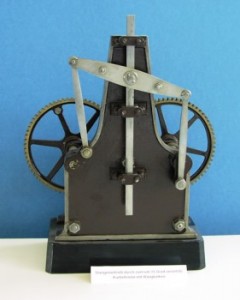 The main mechanism in WAP is based on two gears with ratio equal to 1.2 (18/15 teeth). The entire cycle is completed after five turns of the handle.

Ferdinand Redtenbacher (1809-1863). The transformation of mechanical technology from a mainly workshop-based profession into an engineering science, particularly in the area of design of machines and mechanisms, is closely related with the name of Ferdinand Redtenbacher. He was of eminent historical importance for

the evolution of mechanical engineering to a technical science in the nineteenth century. Redtenbacher’s role as the originator of mechanical engineering as a science in Germany is fundamental and of general interest since the introduction of science into engineering is a “sine qua none” for the development of a powerful high tech industry. As a professor and the director of the Polytechnic School in Karlsruhe, Germany – today the University of Karlsruhe (TH) –, Redtenbacher’s influence therefore helped establish the German manufacturing systems engineering even today. (from Wauer, J., Mauersberger, K., Moon, F. C., 2010. Ferdinand Jakob Redtenbacher (1809–1863), in Distinguished Figures in Mechanism and Machine Science, History of Mechanism and Machine Science, Ceccarelli, M. Ed., Springer Netherlands).