The first time the word “America”… 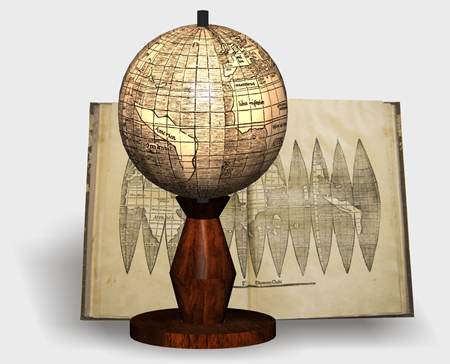 In 1901 Joseph Fisher, a Jesuit historian who was conducting research in in the library of Prince Johannes zu Waldburg- Wolfegg in Wolfegg Castle in Württemberg, Germany, discovered the famous large Waldseemueller’s map called Universalis Cosmographia (1507), as part of the Cosmographiae introductio by the German cartographer Martin Waldseemueller (1470–1520). 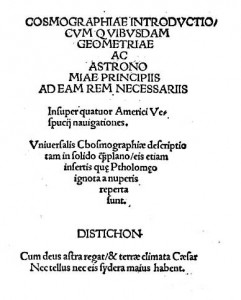 From Wikipedia: Five copies of the globe gores are extant. The first to be rediscovered was found in 1871 and is now in the James Ford Bell Library of the University of Minnesota. Another copy was found inside a Ptolemy atlas and is in the Bavarian State Library in Munich. A third copy was discovered in 1992 bound into an edition of Aristotle in the Stadtbücherei Offenburg, a public library in Ge 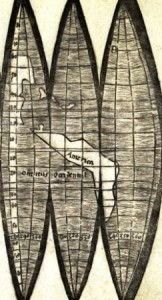 rmany. A fourth copy came to light in 2003 when its European owner read a newspaper article about the Waldseemüller map. It was sold at auction to Charles Frodsham & Co. for $1,002,267, a world record price for a single sheet map. In July 2012, a statement was released from Ludwig Maximilian University of Munich that a fifth copy of the gores had been found in the LMU Library’s collection which is somewhat different from the other copies, perhaps because of a later date of printing. LMU Library has made an electronic version of their copy of the map available online.

Waldseemueller’s group of cartographers derived the word “America” from the name of Italian explorer Amerigo Vespucci, who was the first to argue that the land mass discovered by Christopher Columbus in 1492 was a new continent, and not part of Asia. Waldseemueller and his fellow scholars used an account of Vespucci’s voyages to draw their new maps. The real merit of Vespucci in the exploration of the New World is still subject of debate, making the story of the Cosmographiae introductio, the large map and the small globe even more fascinating.

You can find a lot of information on Wikipedia, of course. If you are really interested, I suggest to read Toby Lester’s The Fourth Part of the Globe (Free Press, 2009).

Note: The twelve gores I used for this globe design were adapted from the high-res. file (1509 edition) freely downloadable at the Library of Congress website.

1 Response to The first time the word “America”…