An hour’s drive from Rostov, vast wheat fields welcome visitors to Zernograd, as do a couple of relics of the old Soviet days: a hammer-and-sickle monument and a statue of Lenin. Zernograd became a showpiece of the Soviet collectivized farm system with help from American sympathizers who arrived in the 1920s with U.S. tractors and combines. Now, the town is again in the vanguard of Russian agriculture.
[Thurow, Roger. “Grain Drain: New Farm Powers sow the Seeds of America’s Agricultural Woes. ” Wall Street Journal, 18 June 2004, sec. A1.] 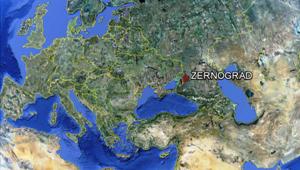